Ben Bishop is our October featured artist! Ben is a Maine based comic artist who has created comic cover art for some of his favorite characters like Batman, The Teenage Mutant Ninja Turtles, Transformers, and G.I.Joe. Keep reading to learn more!

Ben Bishop is a comic creator from Maine. He self-published his first graphic novel, the 300 page Nathan The Caveman, in 2008 followed by several smaller works. In 2011 Ben illustrated the award-winning book, Lost Trail: Nine Days Alone in the Wilderness, the comic adaptation of the famous Maine story, Lost on A Mountain in Maine. More recently Ben created the world’s very first Split Decision graphic novel called, The Aggregate, a choose your own adventure style comic with 4 beginnings, 7 endings and 25 choices in between. The Aggregate was nominated for a 2018 RINGO AWARD for best original graphic novel, the only self-published book on the ballot.

Ben is the series artist on Kevin Eastman’s new comic, Drawing Blood which raised over $100k on Kickstarter, and was just released. Drawing Blood Book 2, and The Aggregate Book 2 are both set to be released in 2019. Currently, Ben just wrapped up drawing the IDW Published, TMNT RAPHAEL MACRO SERIES. Throughout all this Ben has also been working on characters like the Bloodshot for Valiant Entertainment, Savage Dragon for Image comics, Batman, Transformers, Gi Joe, and more. Ben also provides all the illustrations and designs from Mason’s Brewing Company and their beer cans.

Artist & Craftsman Supply: Did you go to school for art/what is your background?

Ben Bishop: I attempted to go to Maine College of Art for Illustration. I was able to go for a year, but the second year of school my loans didn’t go through and I was forced to drop out. That’s when I decided to get serious about making comics on my own. I asked myself, “well, if you want to make comics, why don’t you JUST MAKE COMICS?” So, I did. I spent the next 4 years writing, illustrating and ultimately self-publishing my first creator owned graphic novel, the 300 page NATHAN THE CAVEMAN. That wound up being the education I needed, and luckily, I was self-driven enough to keep the momentum going and continue getting more and more work from there. Everything started with that book.

A&C: Do you have a favorite artist/piece of art?

A&C: What drew you to art initially?

BB: I’ve been drawing since I was 4 years old. It’s all I’ve ever wanted to do. I started making my own comics when I was 11 and wrote to Marvel asking for a job. They told me to keep at it, and get older, and keep in touch… I’ve always wanted to have my own stories and characters and books that other people would stumble on and maybe be inspired by, like I was of the stuff I was reading or watching when I was a kid.

A&C: What is your go-to album/artist right now (in the studio)?

BB: I’ve been listening to a lot of John Carpenter albums and scores. Also, some Manchester Orchestra, Jimmy Eat World, Thrice and City and Colour.

A&C: If you’ve shopped with us, what do you like most about Artist & Craftsman Supply?

BB: You guys have never been out of stock of anything I was looking for. I’m really digging the new POSCA Paint Pens and all the Pentel brush pens. I’ve been buying tons of the empty Aquash brushes and filling them with different ratios of water and ink, giving myself a variety of grey tones. Pretty great.

A&C: What’s one thing you can’t leave an art store without buying?

BB: I’m always looking for new sketchbooks, but usually wind up just restocking on all my go to paper.

A&C: How has your practice changed over time?

BB: I have a studio separate from my house now. Which is nice, giving me more space for all my toys and desks and what not, but also it helps define a real line between work and home. When I used to work from home I would never stop. From the moment I woke up until I fell asleep drawing on the couch, I was always on. Having the studio helps me keep healthier hours and find time to shut off and be a good husband at home. I still draw like 12 to 16 hours a day, but when I’m home, I’m off the clock… For the most part.

A&C: What is the best piece of advice you have ever been given (not necessarily art related)?

BB: Hmmm. I guess it was “draw less”. Not less often but know where to put the detail. In comics it’s important to get people to look where you want them to, and not distract with unneeded details. Lots of up and coming artists think they need to draw every detail of every brick. You want to either have a background that’s less detailed than your focal character, or vice versa. It’s the reason you see highly detailed background paintings in old Disney animations. The flat characters stand out from the background, so we can focus on them, rather than blending in and getting lost. In comics, knowing where to put the detail, rather than over rendering every tiny detail in every panel, is very important. 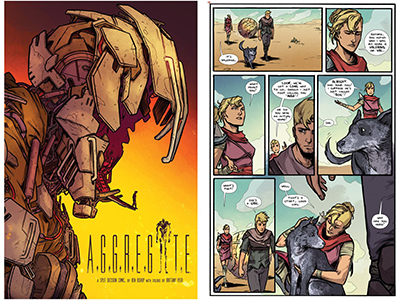 A&C: What inspires you?

BB: Movies, music, other comics… Anything really. I come up with my best ideas while I’m on long drives. I think it’s because it’s one of the only times we’re not (supposed to be anyway) on our phones. No one has any empty THINKING time anymore… I’ll get really inspired while I’m driving, just figuring out a whole story or idea in my head.

A&C: What is your favorite place to visit where you live?